Click organic conformal coatings to find out about polyurethanes or contact us directly and we can help you.

The cleaning of a printed circuit board (PCB) before conformal coating application is normally done for two key reasons:

They have different effects on the lifetime of the circuit board but can be equally important.

The removal of contaminants from the surface of a printed circuit board before coating application could be important.

The contamination may be harmful and affect the long-term reliability of the circuit. Defects like corrosion can be devastating to a circuit performance in the field.

Also, applying the coating over the contamination will not necessarily improve the reliability.

Therefore, cleaning the PCB before coating could be advantageous.

It could avoid conformal coating defects like de-wetting and delamination. It can also help promote adhesion of the coating to the PCB.

The surface preparation can be extremely important, especially where some conformal coatings may have compatibility issues with the circuit board.

Therefore, cleaning a PCB before conformal coating may improve the coating quality and minimise defects.

What types of contamination may be present on a circuit board?

Cleaning is used to remove many different types of contaminants from the manufacturing and assembly processes.

They can affect the long-term reliability of the circuit after conformal coating.

The residues can come from many areas including:

Removing the contamination may be a priority depending on their harmfulness.

How should I clean the printed circuit board?

Cleaning circuit boards before coating is a huge topic by itself.

Successful cleaning of circuits can be achieved by a variety of techniques.

These cleaning techniques include:

The key to success in cleaning is similar to the success made with coating.

You need to match the cleaning process, materials and the circuit board together.

This will give the best results for application of the conformal coating.

How do I validate my cleaning process?

There are many techniques that can be used to measure cleanliness. They include many IPC test methods.

The techniques available include:

Further information can be found in the IPC HDBK 001 on different cleanliness assessment methods or talk to us. 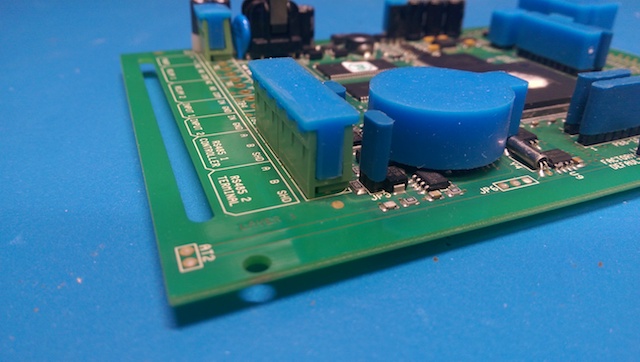 The use of masking tapes, dots and liquid latex can be an effective process in protecting components from ingress of conformal coating.

However, the masking can be labour intensive, difficult and time consuming.

Masking boots can offer a labour saving alternative in both the masking and de-masking stages of the coating process. This saves time and money.

Further if the boots are recyclable then the savings can be even higher.

Three reasons to use masking boots

This means you could save a lot of money very quickly when switching to masking boots.

Normally, conformal coatings must exhibit good adhesion to the PCB in order to be effective in the long term in protecting the circuit.

Therefore, the surface properties of the circuit board can be critical to the success of the coating adhesion.

Cleaning of circuit boards before conformal coating has taken place for many years.

The reasons for doing this have always remained the same:

Traditionally, cleaning and adhesion promotion has been achieved by either using a wet chemistry treatment like washing or applying extra undercoats (priming).

Now, there are new methods and techniques appearing on the market for improving cleaning, adhesion and actually coating circuit boards differently to the traditional methods.

One of these techniques is plasma treatment.

Why use Plasma to clean circuit boards?

Here are a few key reasons to use plasma cleaning and surface treatment of printed circuit boards:

This means the plasma process can be highly effective on printed circuit boards.

Contact us directly and we can help you with your plasma treatment requirements.

Nexus has been examining a new, novel technique that may be able to superior protection for electronic circuit boards compared to the standard coating methods like conformal coatings and Parylene but also actually be cost-effective.

So, why is this new coating so good compared to Parylene and other conformal coatings?

The final MVD coating built up is much thinner than the other traditional coatings including Parylene. However, its protective performance has been found to be superior to them all in most categories of testing so far.

Key performance indicators like Water Vapor Transmission Rate (WVTR), optical clarity, temperature resistance and hydrophobicity have been found to be much better than the other coatings.

Further, the really exciting part about this technology is the cost of processing that is extremely low.

Since the coating is extremely thin then it has been found that no masking is required. This is because when components like connectors are joined together then the ultrathin coating does not prevent electrical connection.

This means that the cost of process is purely the cost of application of the material and nothing else.

Since the process is relatively low cost then this does offer a very interesting alternative to the traditional coating materials.

So what does the science of Molecular Vapor Deposition coating (MVD) look like?

The actual film is built up of alternating layers of ALD and CVD thin coating layers.

The ALD is a ceramic-based material providing the insulating properties. The CVD film provides the barrier protection.

This continues until the correct number of layers is built that has the right protection.

Finally, once the required film thickness is achieved with the alternating layers, then a final hydrophobic thin film layer is applied, that combines with the ALD and CVD layers to provide a highly effective barrier.

So, just how good is the hybrid coating as a protective material for electronic circuit boards?

Generally, with protective coatings for electronics then Parylene is considered the gold standard in most cases.

So, Nexus compared Parylene with the MVD material.

What Nexus also identified for the material were some key properties.

So, in reality the MVD material could just be what industries like the automotive and LED sectors are looking for in protecting their circuits where cost and protection abilities are critical.

Contact us directly and we can help you with this new material.

For further information on ALD and its performance then contact us directly or check out our section on Atomic Layer Deposition (ALD).

If you are new to Nexus and our work on conformal coatings then a good place to go is our Start Here page.

Parylene is a conformal coating that is deposited as a gas in a vacuum chamber.

It is a completely different process to the liquid conformal coatings and its properties offer advantages and disadvantages in comparison.

Parylene is a dry process compared to the standard “wet” liquid conformal coatings.

Since Parylene is deposited as a gas its thickness is almost uniform across the whole circuit board.

The ABCs of Parylene

Parylene is an organic polymer conformal coating that is deposited as a gas in a vacuum chamber.

Therefore, the Parylene application process is a completely different process to the liquid conformal coatings.

This gives Parylene unique properties that are not possible with the typical liquid conformal coatings normally used in electronics protection.

Three important points you should know about Parylene

In an effort to answer this question and many more Nexus will begin Phase 1 of a full ongoing Conformal Coating Research Program in August.

This Research will identify the best conformal coating materials, conformal coating application processes and ultimately value for money for customers in the world of electronics printed circuit board protection.

The First Phase of the Research will:

This research will be open to join by users and suppliers alike who wish to access the full unabridged data.

For further information on how to join the Program visit Nexus